When I used to live with my Korean best friend, she would cook this sometimes. It tastes like home, its so warm, spicy and sweet at the same time… this is hands down my most favorite Korean stew. (I also love Jiamppong but I think that’s soup… those are my two favorite.) This recipe is similar to the traditional recipe, but I made it the traditional way and it tasted different from what my friend made. (She never taught me her recipe.) After some trials of different versions, this is the one I liked the most. (For example, traditional one has sesame oil but I didn’t like it with sesame oil. My Korean friends said they don’t put it either.)

*Side Note*:  It takes about 45mins to cook this, and I eat it with rice. so cook some rice on the side if you like rice!!

but I soak chicken in milk for an hour or two prior to cooking, to help it become tender. (Americans soak it in buttermilk, Koreans that with milk, some of my Asian friends (from various countries) soak Chicken in Coke (Cola) and some mentioned canned pineapple juice…)

Ingredients for 2 servings (I don’t eat a lot):

They use Gochujang, the Chili paste for all kinds of Korean food- you can get smaller size if there’s a korean grocery store nearby. I use it for Korean fried rice too! Mirin is also very useful for many traditional yummy Japanese food 🤗

I like to eat out a lot – and when you live in NYC – there are just way many choices.

Now I know there are countless restaurants in this city; and they have so many choices when it comes to them.

I mostly like Asian food – since I’m half Japanese and Thai – I can eat them anytime. I also like French, and American. I loooove Vietnamese food and buffet style Brazilian BBQ places.

There are some places I’ve tried and liked – but there are only handful of places that I keep going back.

One day a person asked me if you were to have the last meal of your life – what would it be? For me, it’s Hanger Steak vermicelli with extra topping of fried egg, at District Saigon. Hands down the best Vietnamese place I’ve been in NYC so far.

I believe they only opened up few years ago – and their catfish is also super juicy. (My friend said the most moist catfish she’s ever tried.) 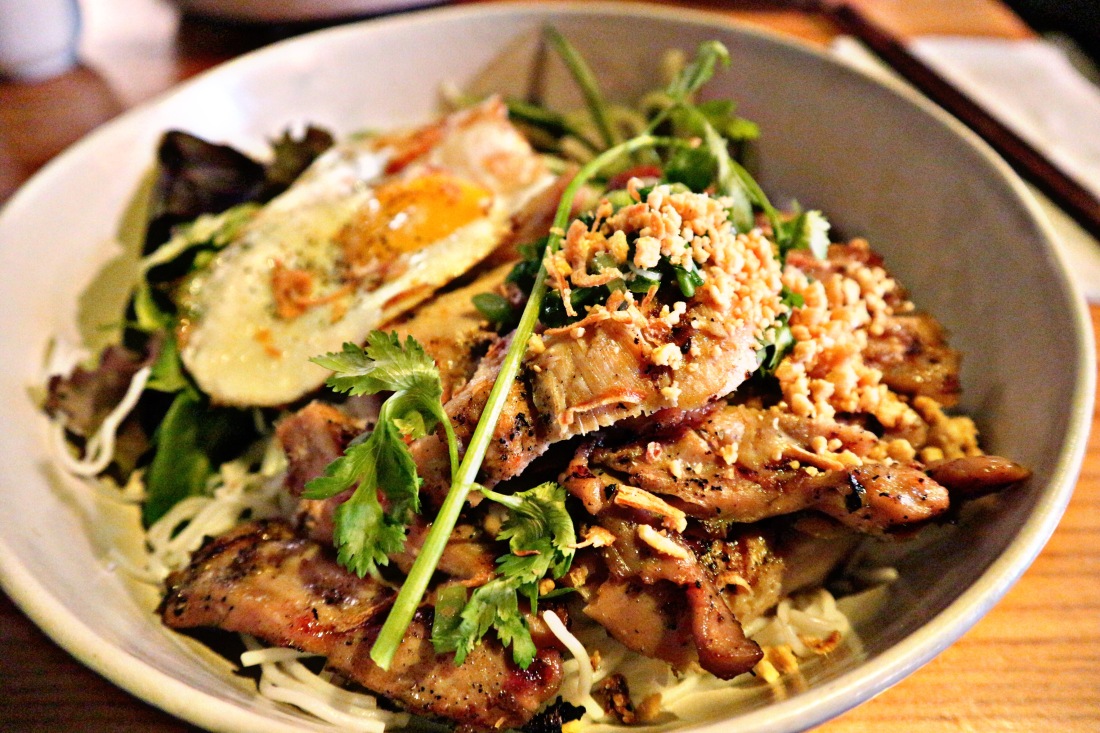 Another place I keep going back to is called District Social. (Haha they are both District S_____.)

I usually go there for a couple of drinks and the steak. The other day though, my friend tried Cod with Lobster sauce and ohhhh my gahhhhhh its to die for. (I mean I almost wanted to push her off the seat and take her food. Jk.) But yes if we had known the sauce was good we would have told the server to never stop and pour that thing all over us. Seriously it’s that good!! 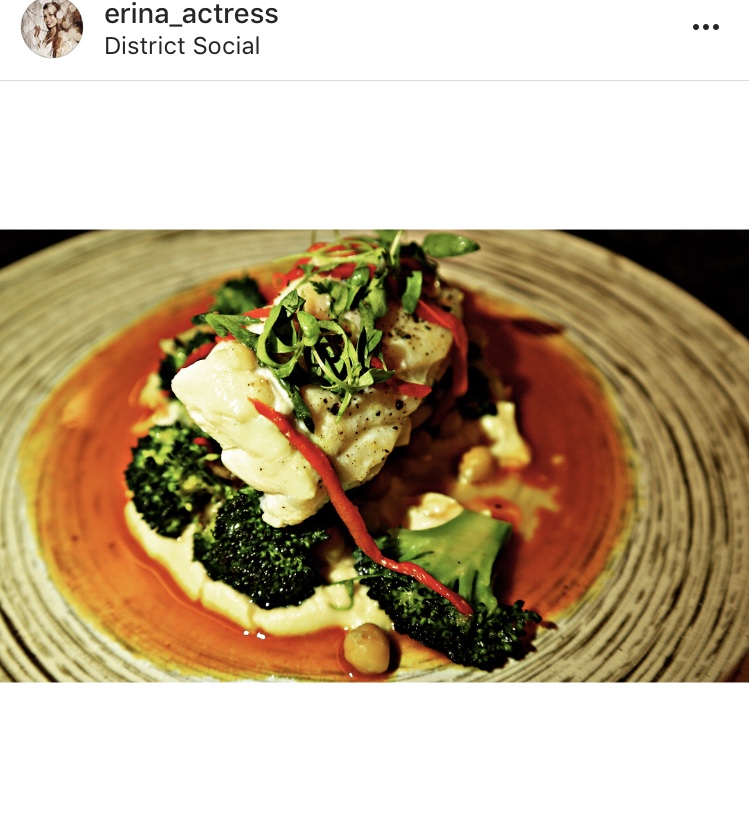 And I also tried their dessert for the first time. I had Creme Brûlée with fig. I love love love both of them so when they combine those two – heaven in my mouth. I’m pretty picky when it comes to dessert – even more so than food – and this one was perfect. Perfectly thin hard caramel and creamy & rich yet not heavy custard.

Its on 37th street by 8th Avenue, close to both Times Square and Penn Station.

Thank you for visiting, until next time 😊

I finally did it!! Visiting NOLA had always been on my bucket list… but eating Alligator meat?  That wasn’t always so.

I normally hate some reptiles and snails, frogs – anything slimy – not that Allgator is slimy – (I found out later,) so of course I didn’t dream of trying it before.

But last year, on my friend’s farewell dinner – my Korean and Thai friends encouraged me to eat fried frog leg. They said “taste like chicken” and that it “tastes goooooddd!!” Now, I have already mentioned that I hate frogs – and I mean it. I ab-so-fu&@ing-lutely hate it. I rather be chased by 3-5 roaches than one frog.

But it was my friend’s farewell party, and I was tipsy. I also felt adventurous in the moment. (Some just call it liquid courage.) So I did it – and it was soooo chewy I can just imagine the frog while swallowing it.

After that one mistake I will never repeat again – I have gained some courage to try some peculiar food. After all, alligator meat isn’t that rare – especially in the south. Some people eat it all the time. (Oh and they love frogs too in some part of swamps – according to the TV show “Chasing Monsters” with Cyril Chauquet.

I yelped some places in NOLA that has gator meat. But they looked too touristy – I don’t wanna go eat at a tourist trap. So I walked around, found some nice looking restaurant called “Kingfish” and checked their menu. Voila!! There it was – “braised Louisiana alligator meat.” It’s a fresh local meat. Scoreeee!! 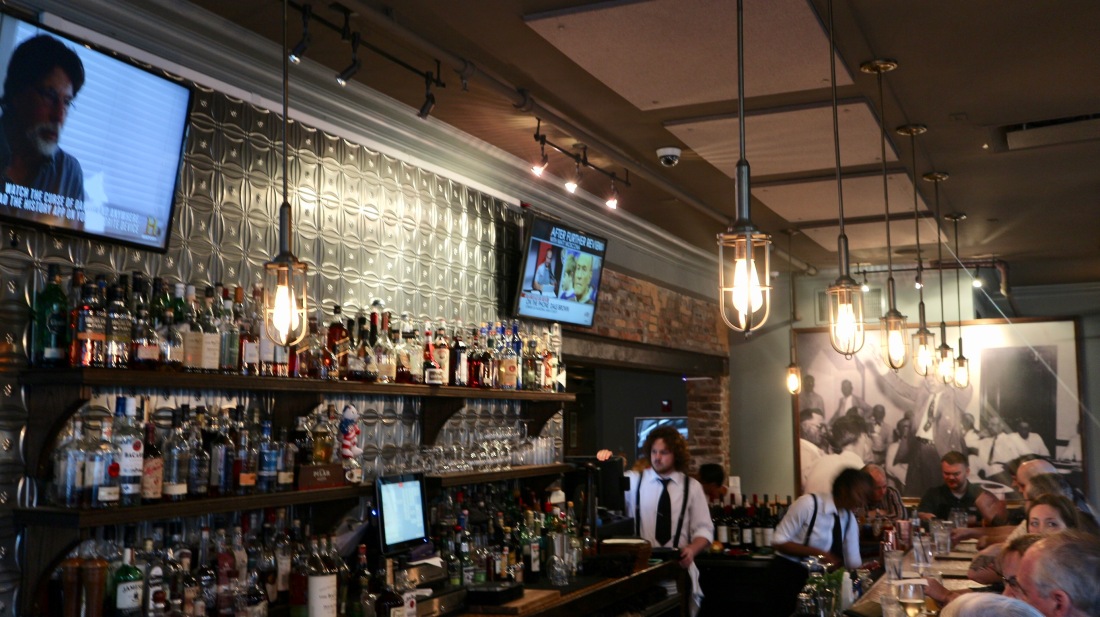 I walk up to the bar, see some friendly bartenders and order it. I order Pinot Grigio, my go-to white wine with seafood. Gator meat, is… seafood, right? Or is it meat? Because it is gator “meat”? Either way Pinot Grigio should do just fine.

I was getting tipsy just from half the glass, the liquid courage is sneaking up on me again. The food runner brings me a big plate.

It looks yummy, and smells good – now dig that fork in – forkyeah- and I shake it a little on the fork. It’s meaty and jiggly. (Yes, I am still talking about the food.)

And I take a bite. Oh. Hmmm. It’s texture is sort of like, a hard fish. It’s not hard at all, but does not easily break apart like regular fish.

It is kind of like between fish and chicken.

I hear fried gator feels more like chicken, but this was braised. So that must be the reason why it’s so tender and fish-like.

It tasted good, and I did it. I wouldn’t always order this, but it was good enough so I can try again.

I learned from true Louisiana swamp guys that they fry their seafood with corn meal – not with flour.

Next time I’m back in Louisiana, I would love to try the seafood and gator meat they cook. That shall be on my next adventure when I’m back in New Orleans!!

Next day, I took “Ultimate Swamp Tour” and held a baby alligator. His skin felt so soft like leather – and he was such a sweetheart!! He will one day make a great meat! Just kidding, haha 😆 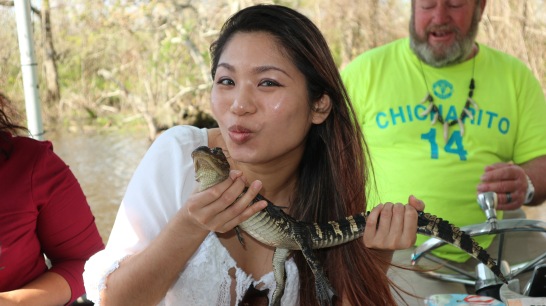 I’ll write about Street art and Jazz in New Orleans for my next post.